Campbell McLean talks to 2019 Year-10 school leaver Jurgen Schwanecke about his role as Environment Prefect at Rathkeale College and his views on conservation and farming. 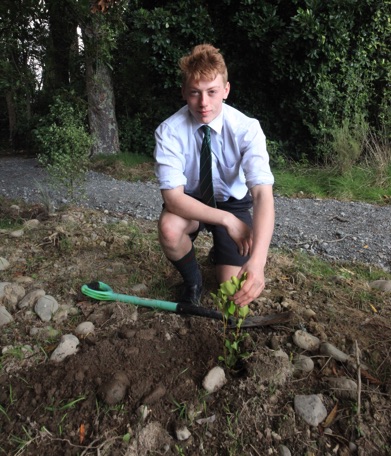 What was your role as the school's Environment Prefect?

Have your views on conservation and environment protection changed since attending high school?

From a young age I was always interested in animals and I still am. I found a passion for agriculture and hunting in New Zealand wilderness areas. These three things have all given me what I believe to be a very neutral stand point. I want to preserve the natural ecosystems and do whatever I can to sustain the balancing act between native habitat and industry.

Since attending Rathkeale I think I’ve become less naive when it comes to conservation. I understand the work that goes in a lot more. In my time, I’ve done a lot of service projects, volunteering at Pukaha, trapping inside and outside the school and tree planting — things which I have really enjoyed. I’ve also found myself helping with things I didn’t use to get involved with, mainly climate strikes. I’m not one for protesting, and I’m not one for emotional turmoil. I could probably write a lot on this but I think a lot of the people taking part in these don’t see the big picture. I want to help the environment, but from a farming perspective it’s not always compatible.

What do you see as some of the most pressing issues facing farmers within the Wairarapa in the coming years, and how do you think we can address them?

At home we have a 14-hectare life style block along the Tauweru river. It floods constantly. About two to three times a year it nearly covers all our most productive flats. I’d love to plant native species around the river and fence it off, but it’s not possible. I see conservation and farming as completely opposing forces. Throw my passion for hunting in and things get even more complicated.

My time at Rathkeale has shown me how the conservation sticker can be thrown onto a lot of things, often by people who don’t see the real picture and frankly can’t share my perspective. Maybe because they don’t have the same interests. I’m not saying my opinion is the need-all and end-all, but if I didn’t think it was the best then I wouldn’t really believe it would. I just want to impose a balance.

All the time I see wood pigeons around my house and we have a lot of hawthorn trees – introduced thorn bushes that produce berries every summer. The wood pigeons eat both the leaves and berries of these trees, in fact it’s why there are so many of them. The same could be said for the tui’s, pukekos, native ducks and other species, despite the large presence of mustelids and rats on our property. Despite millions of years of evolution to adapt to environment. They have undertaken behavioural evolution to capitalise on new food sources and habitat.

My father used to lease a farm next to Mt Bruce. The farm had a plague of rabbits because of the extensive trapping of other predatory animals. Because of the high rabbit populations there’s now bountiful food for the predators. It’s situations like these where I have to see the long-term solutions.

Native animals can and already have adapted to many introduced species, especially in Rathkeale, which in my opinion is a perfect amalgamation of introduced and native species.

Is the goal for New Zealand to be predator free by 2050 realistic? Do you think it’s something that all farmers and others within the wider community can get behind?

I’d say never. Just like climate neutrality is near impossible. The only potential method to achieve this goal would be genetic engineering of sterilised born species in a way that allows the genetics to be passed on. Even with this I’m positive life would find a way. Besides, this doesn’t support New Zealand’s GMO free label and could devastate overseas populations of Australian possums, for instance.

I’m not saying it’s a lost cause that should be abandoned. I think the permanent solution is to keep doing what where doing, continue to aim for controlling pest populations, but in a more sweeping manner that will give animals time to adapt. It’s long-term but it’s the only viable option.

I’m old enough now to form my own opinions, created from trial and error, research and my own experiences. I can see the flaws in departments like DOC, as well as a lot of the biases farmers and conservationists have, including myself. The best I can do is find a sort of average answer that looks at all angles.

In many ways I see New Zealand conservation as flawed. I don’t agree with many practices but I also see the importance of it. Take 1080 for instance. I’m on the fence. I don’t like that it kills my deer but at the same time I can acknowledge its effectiveness in controlling pests. I can see that it does occasionally kill weka and kākā, but in general I would say it is an effective tool, one that probably has greatly varying success rates depending on the region and species in the area. If you had asked me my thoughts in year 9 and would have told you it was evil and that it killed all the deer I wanted to shoot.

Farmers have absolutely been under fire from all angles lately and I’ve seen the affects. I think we need to impose the improvement of the environment but not in a way that completely decimates the farmers voice. It’s just not productive. Conservation needs the farmers on its side if it doesn’t want an upstream battle.

There are many issues to address, including the cleanliness of the Ruamahanga, riparian planting zones and pest populations. Without the farmers help and expertise no progress will be made.

For example the One Billion Trees programme. Forestry doesn’t make good habitat native species at all, it’s pretty much devoid of life, I’ve found. At the same time farmers can’t just plant native forest without any financial return. A while ago I looked into native forestry but was disappointed to find out how poor this would actually be as a way of producing money.

Rathkeale’s bush includes a lot of willow-choked swamp with a few toitoi and coprosmas thrown in. Needless to say the old ponds and the stream-fed swamp alongside the Ruamahanga is the ideal spot for a rejuvinated wetland, with the native scrub bordering the river acting as further habitat.

For those students staying on at school, how can they get more involved or more engaged in environment conservation projects? What do you think needs to be done to get more young people behind the need to restore and protect their environment?

I would like to see schools support conservation in the best way, for me that means more focus on tree planting and habitat restoration and trapping rather than recycling or climate change rallies.

Schools can make a big difference as working volunteers. Students like myself who can dig holes, plant trees, trap rats and do their part to help preserve the farming community and the native habitats that make places like Rathkeale so iconic, all working together in an effort to promote the growth of an ecological highway for more native species to return to lowland and wetland habitats. How awesome would it be to see blue ducks in the Rathkeale swamp and river, and kākā in the bush!

School leavers can also help to support school efforts. In a few years when I come back to the Wairarapa long-term, I’d like to help out.  One year as Environment Prefect isn’t really a lot of time.

When it comes to environmental issues,  what's your advice to other students?

If I had advice for other students — not everyone is into the bush, not everyone wants to skin possums or wear their skins, and go hunting and get their hands dirty. Not everyone loves the outdoor or cares about the natural ecosystem, but if you care even a little, help out, not just for yourself, but for your friends and family. Complete strangers that you’ve never met before care — so that you can swim in a river in summer and not mutate into some horrible organism!