The Ruamahanga Restoration Trust recently teamed up with Mokomoko to sponsor a student field trip to the river, organised by Mokomoko CCEM Program Coordinator, Sam Ludden.

With the help of several teachers, Sam led a group of year 8 & 9 students from Kura Kaupapa o Wairarapa and Mākoura College on a river walk along the upper reaches of the Ruamahanga River. The trip was a highlight of the year for the Mokomoko program and turned out to be a real treat for the students, many of whom took advantage of the warmer weather to swim in the river.

Sam’s idea was to allow the students to explore and experience a beautiful section of the Ruamahanga. The walk included an informal korero and some storytelling to share knowledge and history about this pristine section of our river. The trip was created as a pilot with an idea to continue trips like these for a wider group of students and adults in the years to come. 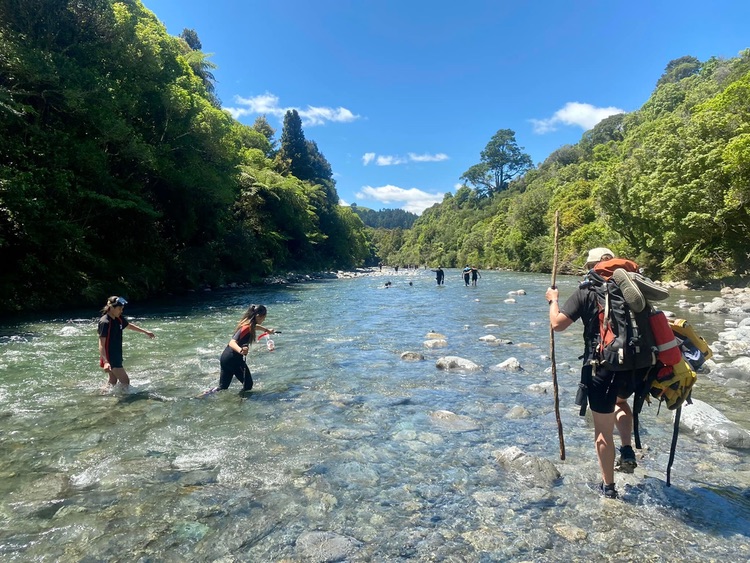 Vicky Pilling, an Outdoor Education teacher at Mākoura who accompanied the students, said the trip provided “huge value” by giving the students a special “awareness of their local environment and what the river’s really about, not just what they see in the town, but where the rivers come from.”

Vicky acknowledged that it’s important to see and experience the river in its natural state, and by doing so she said that it encourages students to take more of an interest and “hopefully develop a love for our environment and a desire to preserve it.”

“For the students to have the element of fun and adventure is really important. It hooks them in but it’s also a tool to allow us to teach them an appreciation of the environment and the preciousness of the resources," she said. 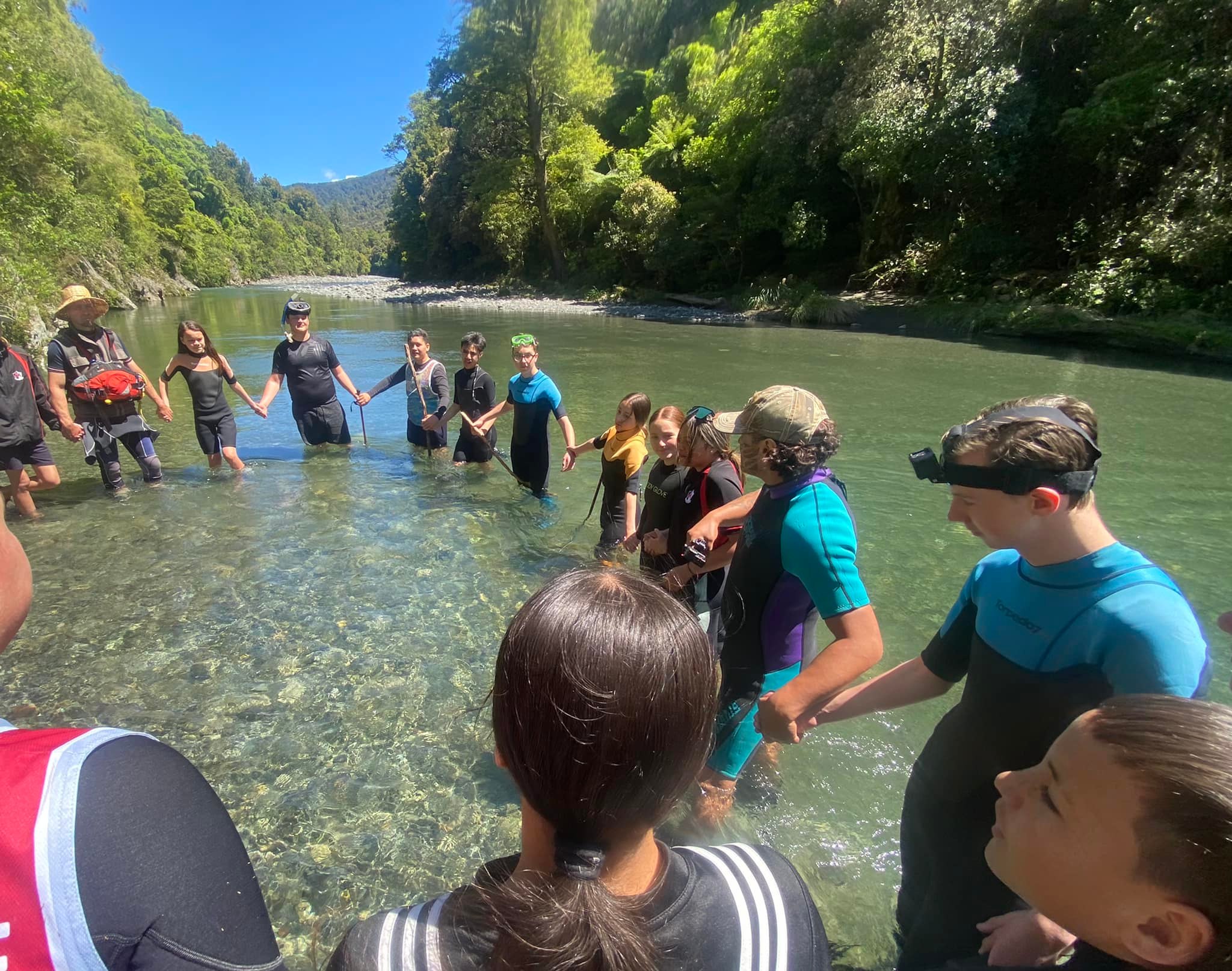 For Wake Mathews, it was his first time on this stretch of the Ruamahanga. Wake works as a year 7-8 kaiako at Kura Kauapa o Wairarapa and jumped at the opportunity to join the field trip.

“The students reconnected with the awa, the river itself,” he told us afterward. “Some of them are descendants of the people with the original connection, and so you can’t put a price on that, and they’re the ones that need to take care of it next, so it's giving them a feeling of responsibility as well.

When the students arrived at the river, Wake led a karakia with everyone standing together knee-deep in the water. “A waiata clears and prepares the way with water, the water carries the spirituality, letting the water know that we’re here.”  For Wake and his students, it would turn out to be a day that he would never forget.

“It was a beautiful experience in every aspect, physically, spiritually, and mentally. If the students didn’t have that relationship, why would they care about it? It’s one thing talking about the river at home, or at the marae, but being there, being immersed in it, that’s where the real connection is.” 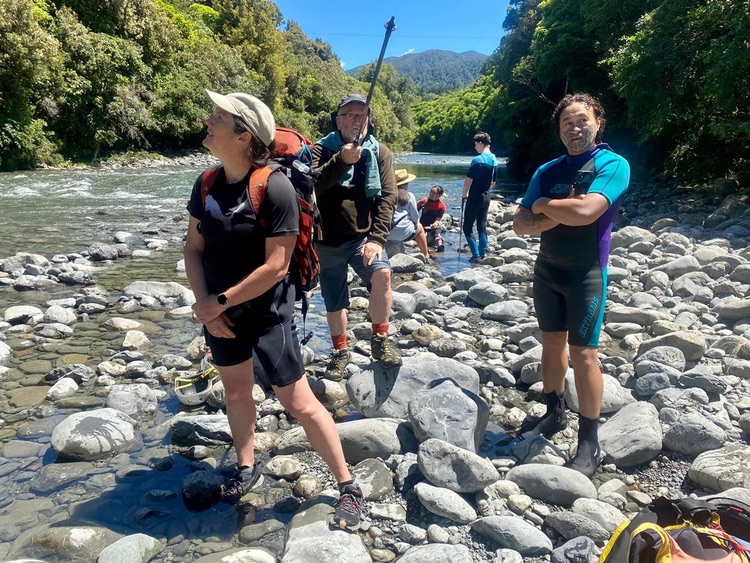 Also on the trip was retired Wairarapa archivist and local river expert, Gareth Winter. Gareth knows the river like the back of his hand and was more than happy to share some of his knowledge about the Ruamahanga and its history.

David Woodcock of Wairarapa Outdoor Pursuits was also on hand to provide water safety instruction along with wetsuits for those less confident about braving the cold water.

Campbell McLean from the Ruamahanga Restoration Trust demonstrated the use of a mini eDNA testing kit from Wilderlab in Wellington. The kits analyse the presence of flora and fauna, thereby helping to determine what's present upstream and whether or not rare or endangered species exist in the area. The results are recorded and publicly available on an interactive map, complete with GPS coordinates of where the sample has been taken. It's McLean's long-term vision to help create bird corridors along the entire length of the Ruamahanga, from the Tararua ranges onwards to Palliser Bay. 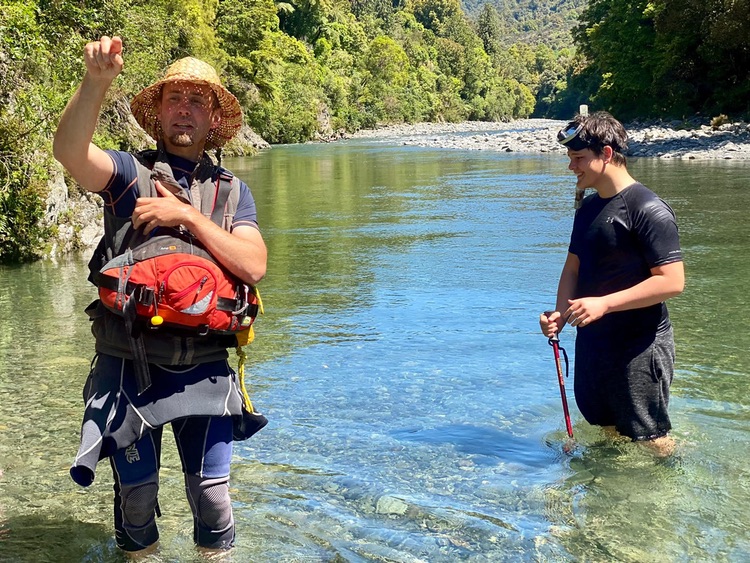 “Having the connections with the stories, especially having experts in the field, is something different from what the students know, and getting them out of the classroom and into nature, that’s the biggest learning anyone can have. But today, especially with our students, they’ve learned about themselves, when some thought they couldn’t do it, like walk down the river, but now they’ve done it — and that, for us, is incredibly empowering,” she said.

“A lot of teachers know how meaningful hands-on learning experiences are to the students, but it’s around their time, so to have resources available for teachers to make those connections and then be able to implement that with their students is a huge, huge help, because teachers don’t necessarily have the time or the know-how to connect with certain groups.” 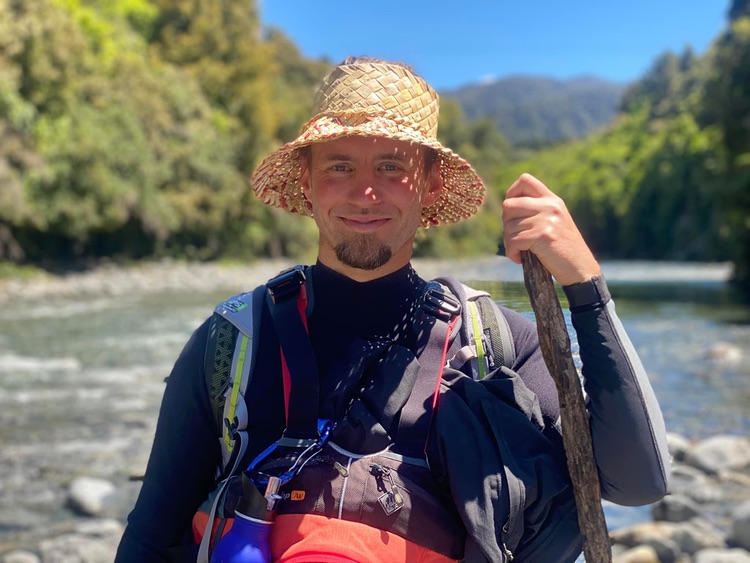 For Sam, it wasn’t just about discovering a new part of their river, “it was almost like a reset of their own wairua and their own spirits.”

“It's having consistency of relationships — if you include rangitahi from the beginning, you are there for them, they’ll be there for you, and you just normalise river life and make it cultural rather than instructional, and lots of time on the river is the best way to guide any programme.”

“Today’s river trip was a chance to create memories that the rangatahi will treasure for life and perhaps guide their future career decisions,” said Sam.